For the dreamer, stars are beautiful shimmering elements in the night sky that they can anchor their wishes on. For the realist, stars are a bright sphere of plasma (whatever that is) that’s held together by its own gravity.

If you or someone you know was born between April 19 and May 20, then you might be interested in learning what the stars have in store for your story. Keep on reading to learn everything you need to know about the Taurus constellation.

Before diving into the main bits, you may be curious about how zodiac signs got to be connected to the stars in the first place. If you’re a total zodiac newbie, then one of the first things you need to learn is the name Ptolemy.

Many, many years ago, there was a Greek-Egyptian astronomer whose main hobby was to sit back, relax, and stare at the sky all night long (much like all the other old men in togas). All this observation eventually led to something good when he came up with a book called the Almagest, which listed out 48 constellations. Although Ptolemy isn’t the first one to study the night sky and map out the stars, he was the pioneer in classifying the 12 zodiac constellations that you know today.

Mythologies: Why a Bull?

Now, going back to the Taurus constellation. What fascinating stories does it represent? For the first one, like a lot of other tales in Greek mythology, it all started with Zeus and his insatiable appetite for beautiful women.

One day, everyone else was minding their own business when Zeus spotted and inevitably fell in love with Europa, the breath-taking princess of Phoenicia. Instead of being a normal guy and winning her over with chocolates and flowers, the king of the gods decided to turn himself into a white Bull to impress her. Apparently, Europa is into dudes who can shapeshift.

She then decided to hop on the bull’s (a.k.a. Zeus’) back, and he took off and crossed the Mediterranean sea with his new boo on his back, and stopped only when they reached the island of Crete. This is eventually where they had their offspring Minos, who grew up to be the infamous king of Crete.

While this isn’t technically a story, the Zuni of Mexico also had an affinity with the Taurus constellation. During springtime, whenever the Pleiades cluster (more on that later) disappeared in the West during dusk, the Zuni would take that as a sign to safely plant their seeds. However, they also knew that they must do this quickly, for once the star cluster reappeared in the East, the seeds planted would bear immature plants.

The Zuni weren’t alone in using the Taurus constellation as an agricultural guide. It’s very prominent in the sky, which makes it an ideal marker. 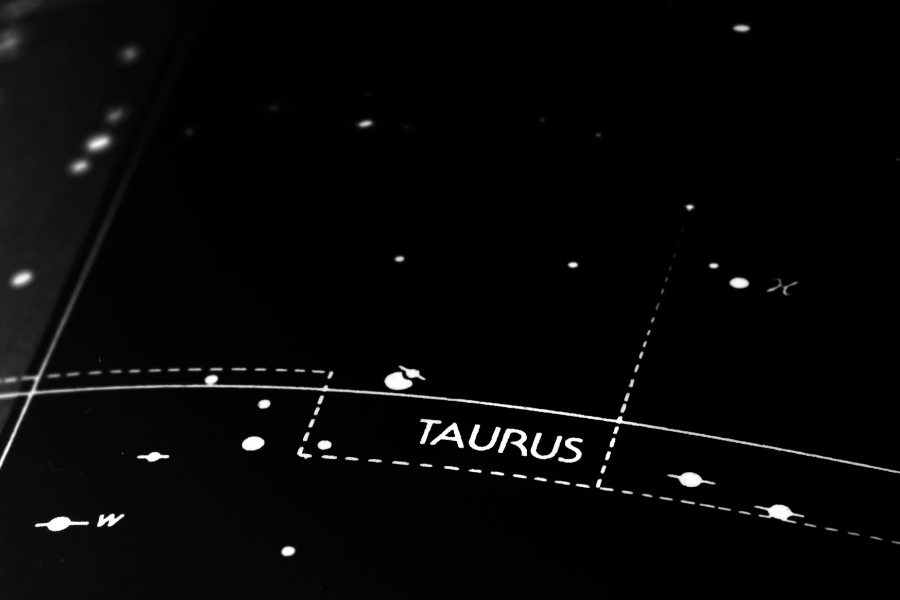 You may be here because you want to know how exactly you’d be able to point up and say, “See that? That’s my constellation.” Well, you’re in luck, because Taurus is one of the most visible (and some would say most beautiful) constellations in the night sky. It’s best if you conduct your search during the winter months, but Taurus is most prominent in January.

You can find this constellation on the first quadrant of the Northern hemisphere (you’ll figure out what that means, just Google it). It is near other well-known constellations, including Aries. This isn’t surprising since Taurus is the 2nd sign in the zodiac and Aries is the 1st.

Another way to find the Taurus constellation in the sky is through its most prominent stars. According to the International Astronomical Union (IAU) the Taurus Constellation has 17 official stars, among which the giants Aldebaran and Elnath are the biggest and brightest.

Conclusion
For centuries now, multiple civilizations have revered the beauty of the Taurus constellation and have found some way to use it as a guide. This may be because, much like the sign that it represents, this constellation is stable and helpful.